The 50 Most Visited Websites in the World 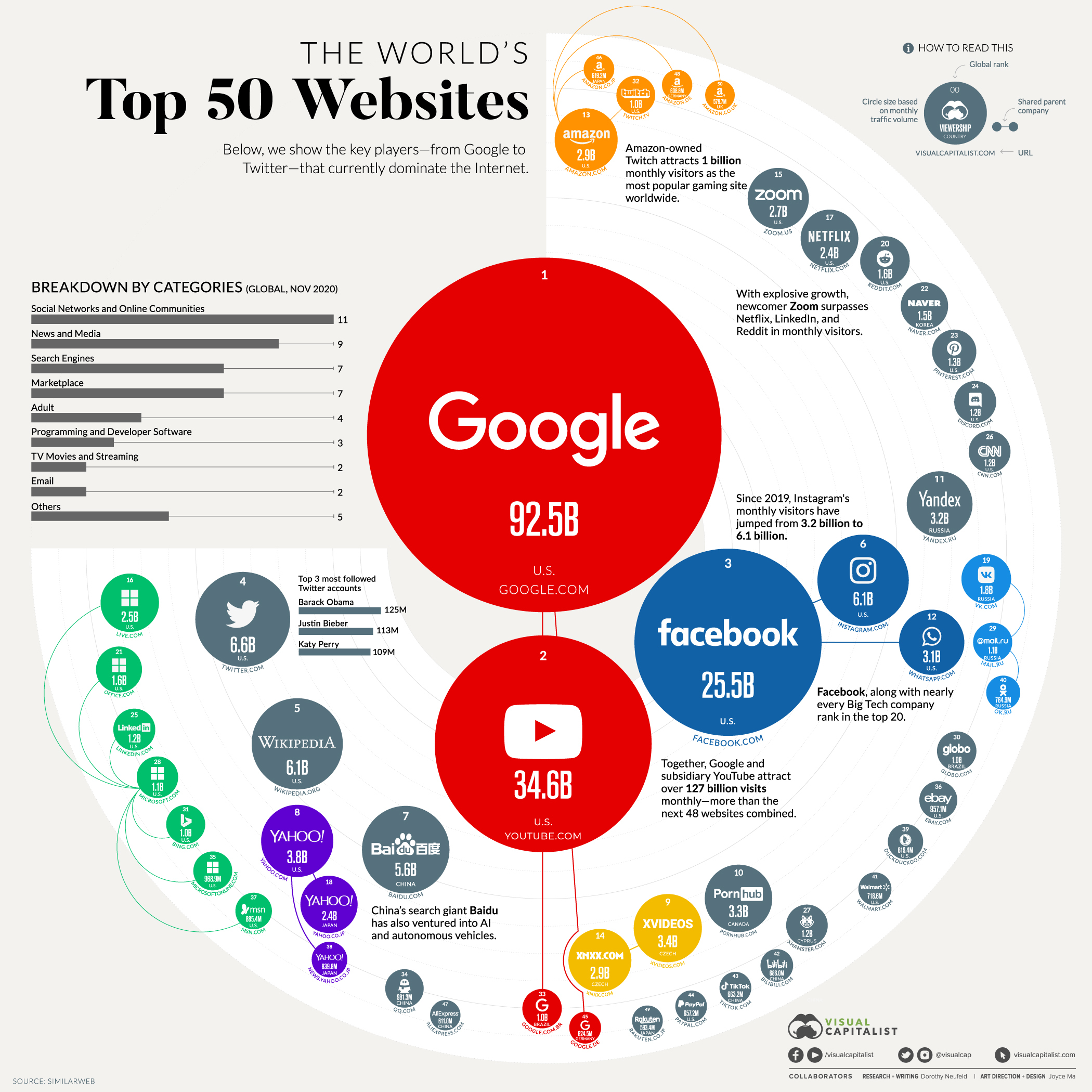 View the high-resolution of the infographic by clicking here.

If you spend any time online, it’s likely you’re familiar with some of the world’s most visited websites. On today’s internet, a handful of giants have unmatched dominance.

Together, the top three websites rake in 152 billion visits monthly, outpacing the next 47 websites combined. What’s more, as the pandemic transformed everything from the way we work, learn, communicate, and shop—a majority of these activities migrated online.

In this new visualization, we look at the most visited websites around the world, drawing data from SimilarWeb (as of November 2020).

Coming in second, social networking platform Facebook has a user base of 2.7 billion. On average, users spend 34 minutes on the site daily, while 36% of users say it’s also where they get their news—higher than any other social network.

As the leading search engine in China, Baidu (#7) received 5.6 billion visitors in November. Baidu is also branching out its business— venturing into electric vehicles (EVs) in a partnership with China-based automaker Geely.

As video conferencing vaulted in demand during the pandemic, Zoom (#15), launched into the most visited websites with 2.7 billion visitors monthly. Similarly, TikTok (#43) became a freshly minted addition.

The Most Visited Websites, By Country of Origin

With 27 sites on the list, the U.S. remains a dominant player. While its reach is highly concentrated on a global level, just a handful of companies own a majority of these sites.

Just four of the most visited websites globally are based in both Russia and Japan, while the rest of the world account for 10 top sites altogether.

While global internet patterns are clearly dominated by a few titans, what can we make of their recent traffic growth?

Wikipedia (#5), a non-profit website that originated in 2001 by Larry Sanger and Jimmy Wales realized over 30% growth.

While large tech companies have only accelerated their market share—Google makes up roughly 90% of the search ad market—several regulatory bodies are placing greater scrutiny on them. An October 2020 antitrust report suggested that Big Tech is in fact anti-competitive, drawing comparisons with oil tycoons of the 19th and 20th centuries.

With these key forces in mind, it raises a critical question: is there a limit to their growth?

This article first appeared in www.marketing.twitter.com Seeking to build and grow your brand using the force of consumer insight, strategic foresight, creative disruption and technology prowess? Talk to us at +971 50 6254340 or engage@groupisd.com or visit www.groupisd.com/story