Podcast: What People Get Wrong about Setting Goals 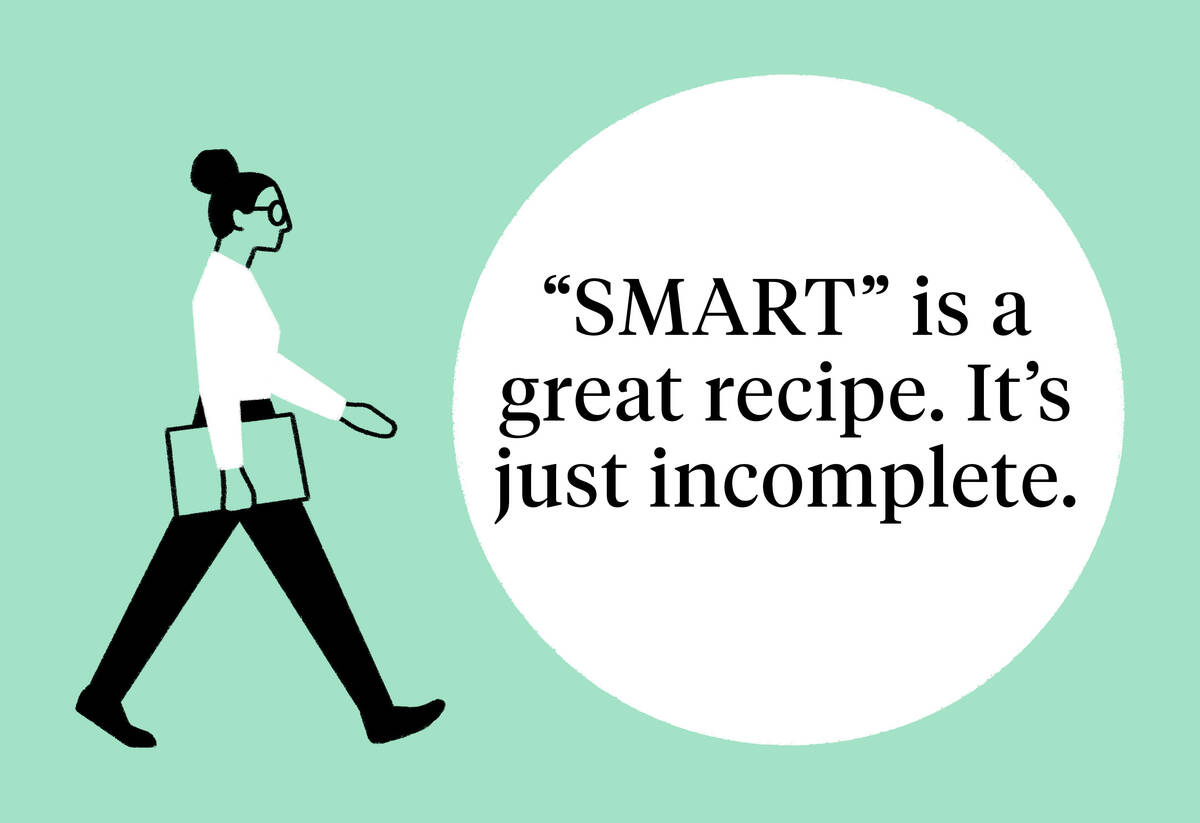 “Turns out those are the ingredients, but the recipe is not complete. It’s just incomplete,” says Craig Wortmann, a clinical professor of marketing at Kellogg and executive director of the Kellogg Sales Institute.

Wortmann says there are three things that people forget to consider when setting goals: tools, support, and a “stop” button.

In this episode of The Insightful Leader, we hear from Wortmann about how to strategize for success.

Laura PAVIN: Hey, it’s Laura. How many of you set New Year’s resolutions in January? I know I did. I was going to drink more water and make sure I read for at least an hour a day. Now it’s April…and, well…I’ve fallen a bit short. And here’s the thing, I’m not alone. In fact, I’m in the majority.

Craig WORTMANN: What we know is from research into New Year’s resolutions and just any goals that get set, very few—less than 10% of people—come even close to reaching their goals.

PAVIN: That’s Craig Wortmann, a clinical professor of marketing, with decades of experience as a sales person, CEO and entrepreneur.

WORTMANN: So, there’s the problem statement: it’s that this is weirdly hard to do.

PAVIN: It’s weird because despite us often falling short on goals, we also know that goals are essential to success in our day-to-day lives. And they’re essential to strong leadership, too.

WORTMANN: If you walk up to any executives, directors and say ‘is one of your roles as a leader to help people set goals?’ They’re going to look at you and say, ‘of course it is.’

WORTMANN: This is a big problem, and it’s a problem that is sneaky and a little deceptive because people tend—myself included—to treat it like it’s just kind of obvious. You set a goal and then you work towards the goal. And…it’s anything but obvious.

PAVIN: Welcome to the Insightful Leader, I’m Laura Pavin. In this episode, Wortmann takes us beyond the conventional knowledge around achieving our goals…and reveals some new and surprising tips that can help set ourselves and teams up for success around that…because there are important things that people — well, A LOT of people — often miss…that’s next.

PAVIN: If you work in an office — or not, honestly — you’ve probably heard of SMART goals.

PAVIN: Whether your company uses this particular framework or not, it’s pretty straightforward why you should avoid setting goals that are vague, unachievable, or that drag on forever without end.

PAVIN: But Wortmann thinks that popular frameworks like this leave some important elements out.

WORTMANN: Turns out those are the ingredients, but the recipe is not complete. It’s just incomplete.

PAVIN: He knows this because…he works with people on this very issue all the time. Wortmann’s the founder of the Kellogg Sales Institute, where he helps leaders develop NOT just the knowledge, but the critical skills AND disciplines they need to grow themselves and their organizations. He’s spent his career building up sales people and helping them set very ambitious goals.

And he has noticed that there are three things that people forget to consider when setting goals…and those are tools, support and…a stop button.

Let’s use a real-world example to understand this better.

A couple months ago, Wortmann met this executive who told him that he wanted to become a better storyteller.

WORTMANN: So I said to the person, ‘that’s fantastic. What would it mean to be a great storyteller?’ And he said, ‘well, I serve a lot of really important clients and very senior people. And I would love to be in a room with them where I sort of stop them in their tracks with a story. Like they go, ‘wow.’’ And I said, ‘okay, so you’re looking for the wow factor.’ And he said, ‘yeah.’ And I said, ‘that’s a tangible outcome. Like that’s something we can actually measure.’

PAVIN: This is a promising start…but just a start. So Wortmann probes him further.

WORTMANN: So go one level deeper, get a little bit more specific. And he said, ‘well, I need to acquire 5 or 10 really powerful stories that will apply to my clients.’ And I said, ‘okay, so now we’re specific, where you’re going to be a better storyteller over what period of time.’ He said, ‘I’d like to do this over the next quarter.’ So I said, ‘okay, three months.’

PAVIN: Are you hearing what I’m hearing? This would probably pass muster with most popular frameworks. But Wortmann isn’t done. He asks something else.

WORTMANN: Then I said, where are you going to acquire them?

PAVIN: As in, how is this executive going to find or think up these stories? Where will they come from?

This “how” question, Wortmann says, is often missing from conversations about skill acquisition. To maximize their likelihood of success, goal-setters should consider what TOOLS they will need: these are the tangible things that will enable them to achieve their goals. For this executive, maybe this would mean classes to really break down the nuts and bolts of effective storytelling. For another goal, like developing stronger data analytics skills, this might mean software or online coursework.

Many times, one of the simplest tools of all is the one that’s needed most…our calendar. Wortmann is too often surprised that senior people resist putting time blocks in their calendars to work towards their specific goals. And without that simple tool…blocking time to practice and get coaching…they are putting a hurdle in front of that goal before they even start.

WORTMANN: Those are tools.

PAVIN: And then there’s support. Think of support as coaching, which…of course…a manager can do. But…

WORTMANN: That’s not enough, actually. Turns out, you shouldn’t just have one coach. You should have multiple coaches.

PAVIN: And that’s because…a manager might not be very good at telling stories either, for example. And even if they are, other coaches can provide different perspectives…and it just distributes the workload across multiple people.

PAVIN: You may even consider having coaches in your life–like family members–who do nothing but hold you accountable for working toward your goal.

So, when Wortmann asked how the executive was going to acquire these stories, he was pleased to hear…this.

WORTMANN: He said, ‘there’s this woman in the company that’s like, I don’t know how she does it. Every time she’s in a room, she just tells these amazing stories.

PAVIN: Bingo. Sounds like an ideal coach. And more than that…

PAVIN: Now they’ve figured out a coach for this executive, who can also provide some of the tools he needs to become a better storyteller…maybe she can guide him to classes he can take…books he can read..or experiences he needs to tell great stories.

PAVIN: But Wortmann isn’t done. You see…he keeps asking questions…and they decide the executive is going to meet with his coach to practice stories…

WORTMANN: I said, ‘great. How long will that take?’

PAVIN: The executive estimates it’ll be about a half hour.

WORTMANN: I said, ‘okay, great. Are you going to practice those before you get to her?’

PAVIN: The executive says “yes”….and they add up that time. And then they add into that all the time he’ll need to practice with his boss — because, remember, multiple coaches.

WORTMANN: And I said, ‘fantastic. We’ve just figured out.’ And I repeated it all. And I said, ‘and it’s about 90 minutes to two hours a week. What are you going to stop doing?’

PAVIN: This brings us to the “stop button” I teased a bit ago.

WORTMANN: Stop… may strike you as weird. It’s like, wait a minute. What do you mean by stop?

PAVIN: It definitely struck this executive as weird. What is he going to STOP doing?? So he thinks for a moment and then says…well nothing. To which Wortmann responds…

PAVIN: Here’s the thing…a lot of people who set goals are already ambitious people with a lot already on their plate. Everything that currently fills their day feels essential. So they just try to just cram one more thing in, which is a recipe for failure.

WORTMANN: We all have the same time. It’s a question of priority, which is where back to support the coaching structure comes in. You have to have people holding you accountable, stop doing this, start doing this. If you really want to make a goal. It’s great that you want to increase your sales by 20%. What are you going to stop doing in order to achieve that?

PAVIN: So the executive hears that feedback, sits with it for a minute, and comes back with this.

WORTMANN: He goes…’you know what I do? it’s a really bad habit.’ And I said, ‘what is it?’ He said, ‘when I’m getting ready for a client pitch, I spend hours and hours on the decks. And I just mess around with the slides.’ He said, ‘I probably do that like four hours a week.’ I said, ‘can you cut it in half?’ He said, ‘yeah.’ I said, ‘you just found your two hours. You’re going to be an amazing storyteller in three months.’

PAVIN: This is what is so powerful about Stop. It makes you slow down and reflect on how you spend your time. More likely than not, if you really do care about achieving a goal, you’ll be able to find time in your day that is a lower priority than your goal. You can’t just manufacture more time, but you can reprioritize to make the goals the things you spend time on.

The man Wortmann was talking about, by the way, is currently still working on achieving his goal of being a better storyteller…if you were looking for closure on that. But Wortmann has full confidence he’s going to be a rockstar storyteller very soon.

PAVIN: So if you, or your employee, have a measurable goal, the tools and support to tackle it, and a plan to stop doing something else in order to make time for that goal, it’s a lot more likely to be met.

And guess what? Even if you fall short, the process of trying to obtain the goal…does something incredibly valuable

WORTMANN: I’ll be very provocative with this.

WORTMANN: Don’t worry about the outcome. Only worry about the process. Think about it. If my goal is to increase my sales. And, and you say to me…what’s your timeline? And I say, three months, what matters more? Me sitting and thinking about the outcome or me doing something that will get me to that outcome at two o’clock this afternoon?

PAVIN: It’s the discipline you get when you’re working towards acquiring a new discipline…that can translate to so many other aspects of your life.

Wortmann says if we help our employees AND ourselves get better at honing this process…we might just end up being…unstoppable.

PAVIN: This episode of The Insightful Leader was produced by Jessica Love, Emily Stone, Fred Schmalz, Maja Kos, Blake GOH-bull and Laura Pavin. It was written and mixed by Andrew Meriwether, and edited by Laura Pavin and Jessica Love. Special thanks to Craig Wortmann. As a reminder, you can find us on iTunes, Google Play, Spotify, or our website. If you like this show, please leave us a review or rating. That helps new listeners find us. And visit us at insight.kellogg.northwestern.edu. We’ll be back in a couple weeks with another episode of The Insightful Leader.