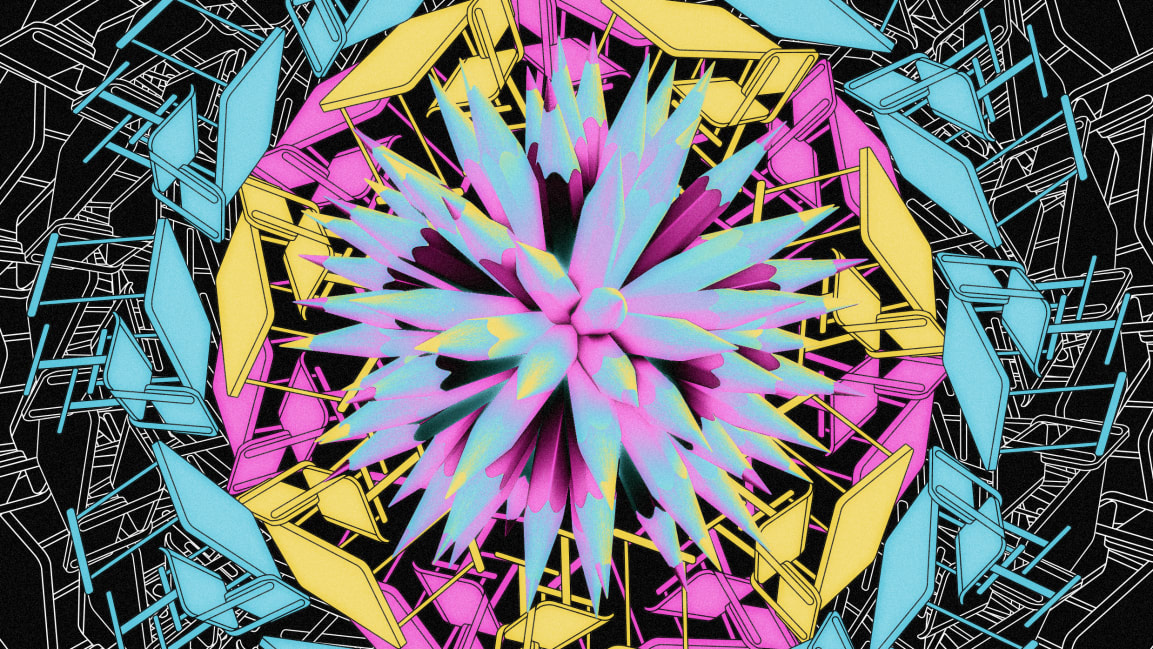 At 85, the legendary designer and author of The Design of Everyday Things is on a mission to rethink out-of-touch design schools. Just don’t call it a swan song.

Don Norman, the godfather of UX, is holding up his phone on Zoom. “It’s a Google Pixel,” he says, “but it doesn’t matter, they’re all the same.” He explains that if you add less than an inch, you could put in a bigger battery. A little more than that, and you’d make that battery replaceable. But smartphones weren’t meant to last. And like myriad other things we use in our daily lives—our cars, our clothes, the fridge, even our lightbulbs—this is by design.

Norman knows a thing or two about design, both good and bad. In The Design of Everyday Things, his seminal critique of VCRs no one could use, and doors that left us perpetually unsure about whether we should push them or pull them, he argued every object should be intuitive to use. A behavioral scientist and engineer by background, Norman in the 1990s was a vice president at Apple, where he coined the now ubiquitous term “user experience.” He cofounded the UX consulting firm Nielsen Norman group. And he has taught at several schools, including the University of California in San Diego, Northwestern University, and the IIT Institute of Design at the Illinois Institute of Technology.

The way he puts it, Norman has now retired five times, but his definition of retirement may surprise you. Age 85, Norman’s to-do list is of Herculean proportions: He is writing a book about the role of design in addressing major societal issues. He is also fighting for his home turf of San Diego to become the 2024 World Design Capital. And to cap it all off, he has taken upon himself the ambitious, high-stakes task of rethinking the entire design education system across the world. To call it a swan song would imply Norman is retiring in style—again—but in many ways, he is only just getting started.

Two years ago, Norman cofounded the Future of Design Education Initiative with Karel Vredenburg, director of design at IBM. Since then, the pair has put together a steering committee composed of leading designers from both academia and the industry. Over 600 volunteers have joined in, ranging from undergraduate students to deans, department chairs, and industry executives from every region of the world.

The Future of Design Education Initiative is as multifaceted and complicated as the world of education itself, but its mission is clear: to develop a new framework of design curricula for the future—because design education is flawed and outdated, and it has grown increasingly irrelevant to the long list of 21st century issues the world is grappling with.

RETHINKING THE PARAMETERS OF A DESIGN PROBLEM

But first, back to the Google Pixel story. What Norman is referring to as he spins the black screen between his fingers is a well-known manufacturing strategy called planned obsolescence: If things were meant to last forever, how would companies make money?

“This is an existential issue,” he says. “We’re going to die because of climate change, and although we have people trying to stop it, they’re taking it as a technology problem.” Except technology is not the problem, it’s just a symptom. “One of the things we teach in design is to think about what the core issues are because the problem will come back again,” he says.

From racial equity to climate change, Norman says that many designers don’t interpret certain problems as design problems when they should. Take healthcare in the United States, he says—a “very complicated” industry that involves economics, politics, and certain beliefs about the role of the government. “If it’s not designers who [see it as a design problem], who would?” he asks.

That mindset shift starts with education. “Designers, traditionally, sit and design something and pass it onto the next stage, then they complain it wasn’t done the way they designed it,” he says. But if they were trained to sit through the whole system, the outcomes would be better. “Learning the political issues, and economic issues, and divergent views is a critically important thing to getting something done in this world,” he says.

The Future of Design Education Initiative is rooted in the truth that designers today have a very different set of problems to solve compared to the past. Many college design programs still focus on the surface appearance of objects when a radically broader perspective is key. “You have to focus on ethics, decolonization, designing with influences of various cultures,” says Vredenburg.

The narrow scope of education has a lot to do with it. For one, Norman says designers in many traditional design schools work alone. “We should teach people at school how to be collaborative,” says Norman. In the working world, designers work in teams, and that’s a fundamental shift that needs to start at a young age. “Kindergarten is the one place you’re doing work with other people,” says Norman.

Teaching students to think critically is another key factor. “When designing an artifact in trade design education, somebody will give you a short list of constraints, and you assume they’re stable and limited in number,” says Meredith Davis, a professor emerita of graphic design at North Carolina State University, and a member of the initiative’s executive committee along with Norman and Vredenburg. Of course, constraints fluctuate constantly, so when students get out into the world, they expect a world with “terribly well-delineated problems,” she says.

As a result, young designers are woefully unprepared when they are tossed into the workforce. Take IBM as one example. In 2012, the tech giant entered a design renaissance: The company trained its entire workforce to think like designers, hired new designers, and filled two-thirds of its design ranks with recent graduates. In the process, Vredenburg says the company noticed a dreadful misalignment between what the company needed and the skillsets of design graduates. “The core craft skills were just fine,” explains Vredenburg, but many lacked knowledge and experience working on complex real-world problems. Multidisciplinary collaboration was also lacking. So IBM invited design hires to attend the company’s design bootcamp program. Vredenburg refers to it as “the missing semester of design school.”

Perhaps, for this reason, the Future of Design Education Initiative seeks to rethink Bachelor, Master, and PhD degrees, but also nontraditional formats like one-year bootcamps. “Many students can’t afford the four-year degree,” says Vredenburg, highlighting that IBM is hiring a lot of people from bootcamps right now.

To execute their vision, the steering committee is following a pattern that was used in the field of computer science: first, you pinpoint the major topics, then the sub-topics, then you identify the learning outcomes associated with them. The steering committee came up with 20 major themes, including “implications on new technologies,” “community engagement,” “social and human behavior,” and “cultural representation.” When all is said and done, these themes will become guideposts for the design educators of tomorrow, and will be available as part of a curricular guidance report.

Of those themes, some can be considered as fundamental, others are specialized, and others yet are optional. But those choices aren’t entirely for the committee to make. “We’re trying to make sure that whatever we come up with is not a template that says go teach this course,” says Davis.

For now, each of these themes was matched with a relevant working group (from the assembly of 600 volunteers) and a group leader (from the steering committee). The groups will explore how to hierarchize each theme, but these will remain guidelines; the exact material and depth of coverage within any theme will vary on the institution and students’ background.

THE SHADOW OF MODERNISM

“The modernist model was so dominant,” says Davis. As Bauhaus thinkers left Germany during World War II and fled all over the world, they spread with them what Davis calls a “template” that was overlaid in a vast number of schools, stripping them of the potential for individual perspectives and specializations.

But that is slowly changing. “This is a moment of experimentation,” says Davis.  Some institutions are experimenting by redefining programs and templates that weren’t “imposed on schools through the European model.” The Ontario College of Art & Design University, under the guidance of Dean Of Design Dori Tunstall, has been working on decolonizing the curriculum since 2016. And unlike many stand-alone schools of art and design that are built around more than 90% design-specific classes, the Bachelor of Design program at Carnegie Mellon University provides a balanced approach, with design classes only accounting for 65%. The rest are a range of disciplines, from computing to history to psychology.

As Vredenburg says, there are “little pockets of good work,” but the goal of this initiative is to systemize design education across the board. Vredenburg says they’re approaching this like designers, with ample room for feedback, so the final product may be a curricular guidance report, but it may require more tools, like training videos, or textbooks—although the latter isn’t in the pipeline. “My hope is it’ll inspire other people to write textbooks,” Norman says.

In the meantime, the group has set up an open call for essays. “Our hope is that people will start reacting to some of this material in short essays, and we’ll start to see some reactions or proposals that would make this a living document,” says Davis. “There’s general consensus right now that we need a paradigm shift.”

It goes without saying that such a complex overhaul will not happen overnight. Norman thinks it will take a decade before change begins to trickle down. One institution might dip its toes, another one might go all in, but the weight of the project will only truly be felt when the project is complete.

When asked about the importance of this initiative as yet another one of his attempts to change the status quo, Norman finds little worth in comparing them to his previous work. Instead, he brings it back to the beneficiaries of this initiative—the future heirs of what may become his biggest legacy. “The education of students has long been a major concern in my life,” Norman says. “What I am most proud of are my students, many of whom have had illustrious careers.”

This article first appeared in www.customerthink.com