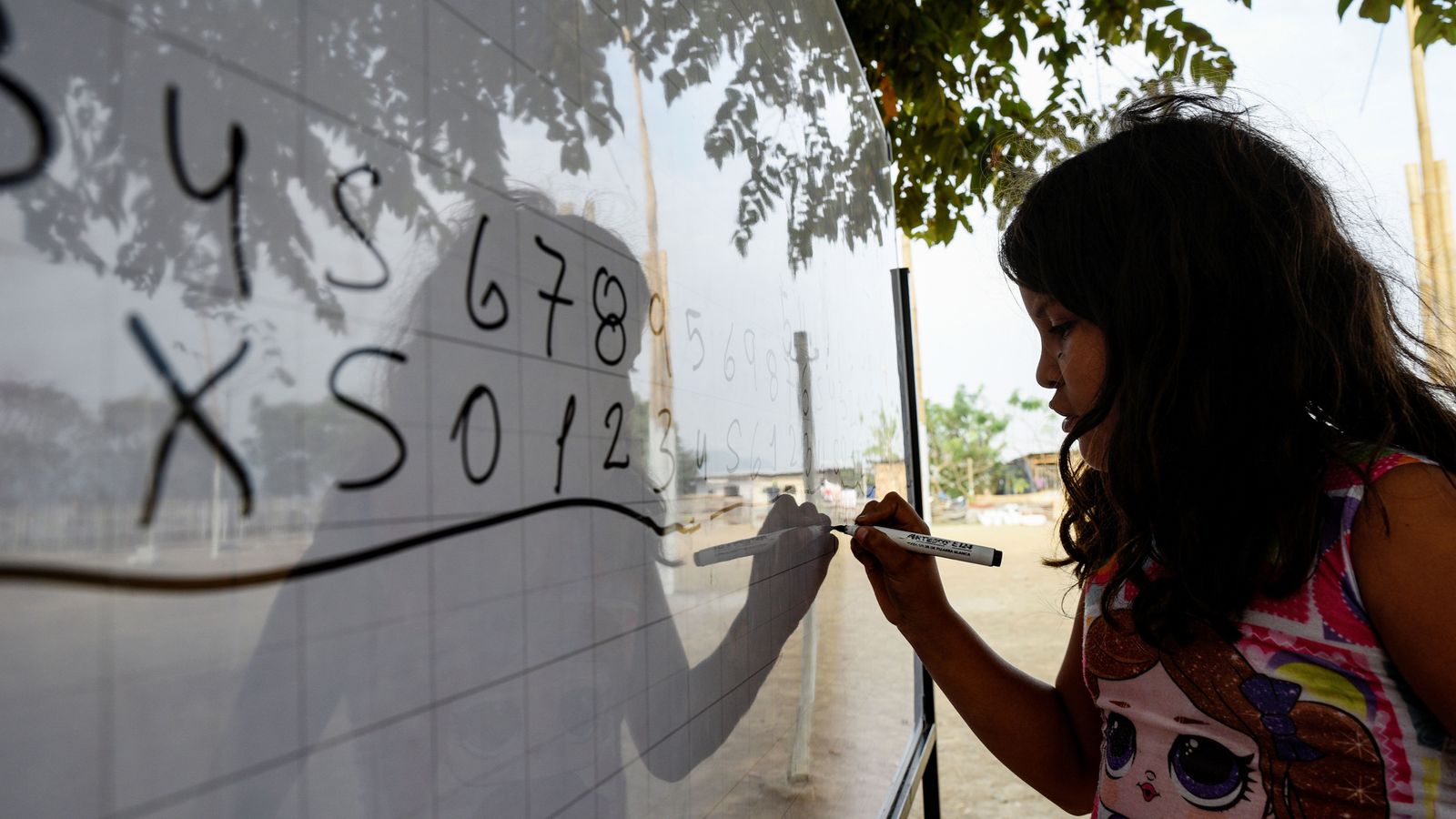 Imagine you are offered a deal with your bank, where your money doubles every three days. If you invest just $1 today, roughly how long will it take for you to become a millionaire?

If your estimates were way out, you are not alone. Many people consistently underestimate how fast the value increases – a mistake known as the “exponential growth bias” – and while it may seem abstract, it may have had profound consequences for people’s behaviour this year.

A spate of studies has shown that people who are susceptible to the exponential growth bias are less concerned about Covid-19’s spread, and less likely to endorse measures like social distancing, hand washing or mask wearing. In other words, this simple mathematical error could be costing lives – meaning that the correction of the bias should be a priority as we attempt to flatten curves and avoid second waves of the pandemic around the world.

To understand the origins of this particular bias, we first need to consider different kinds of growth. The most familiar is “linear”. If your garden produces three apples every day, you have six after two days, nine after three days, and so on.

Exponential growth, by contrast, accelerates over time. Perhaps the simplest example is population growth; the more people you have reproducing, the faster the population grows. Or if you have a weed in your pond that triples each day, the number of plants may start out low – just three on day two, and nine on day three – but it soon escalates (see diagram, below). 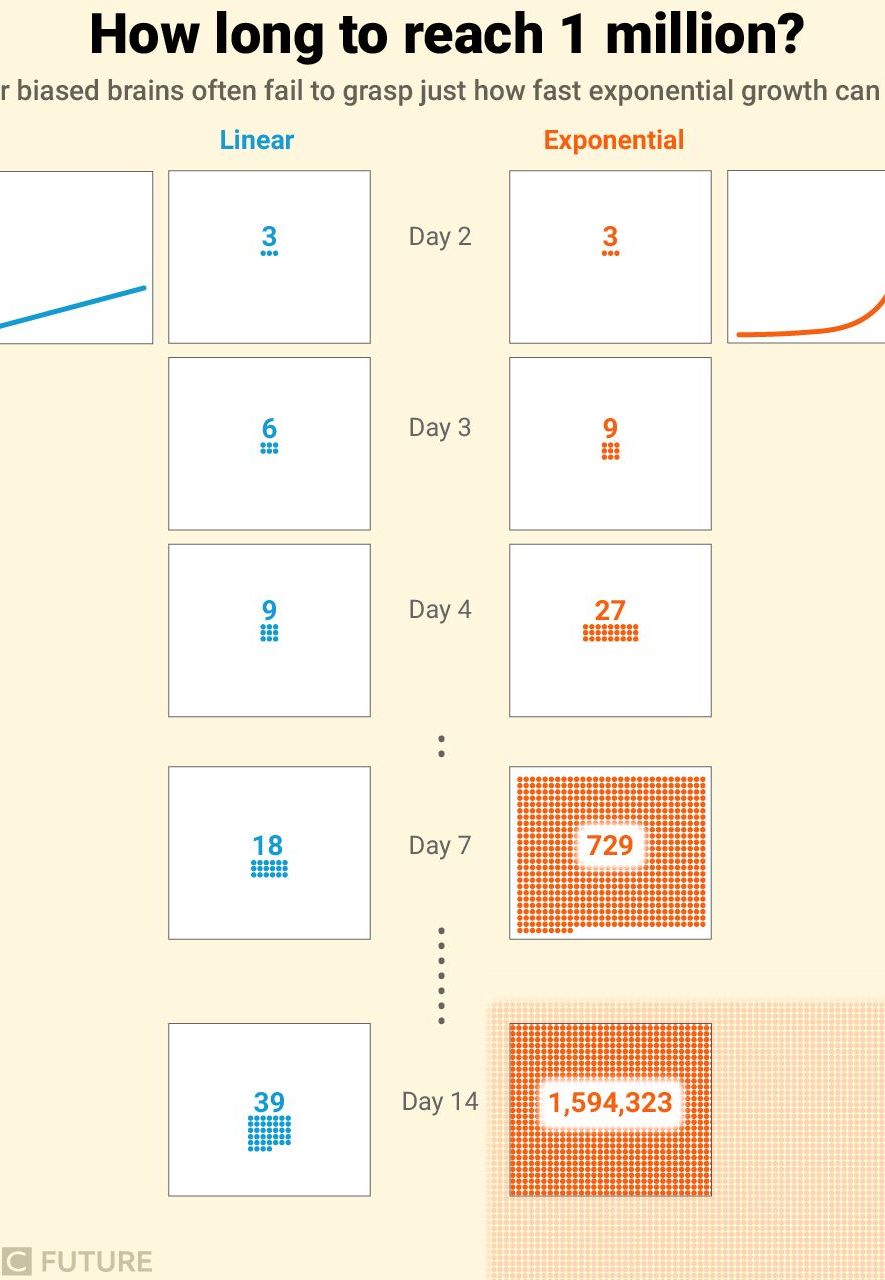 Our tendency to overlook exponential growth has been known for millennia. According to an Indian legend, the brahmin Sissa ibn Dahir was offered a prize for inventing an early version of chess. He asked for one grain of wheat to be placed on the first square on the board, two for the second square, four for the third square, doubling each time up to the 64th square. The king apparently laughed at the humility of ibn Dahir’s request – until his treasurers reported that it would outstrip all the food in the land (18,446,744,073,709,551,615 grains in total).

It was only in the late 2000s that scientists started to study the bias formally, with research showing that most people – like Sissa ibn Dahir’s king – intuitively assume that most growth is linear, leading them to vastly underestimate the speed of exponential increase.

These initial studies were primarily concerned with the consequences for our bank balance. Most savings accounts offer compound interest, for example, where you accrue additional interest on the interest you have already earned. This is a classic example of exponential growth, and it means that even low interest rates pay off handsomely over time. If you have a 5% interest rate, then £1,000 invested today will be worth £1,050 next year, and £1,102.50 the year after… which adds up to more than £7,000 in 40 years’ time. Yet most people don’t recognise how much more bang for their buck they will receive if they start investing early, so they leave themselves short for their retirement. 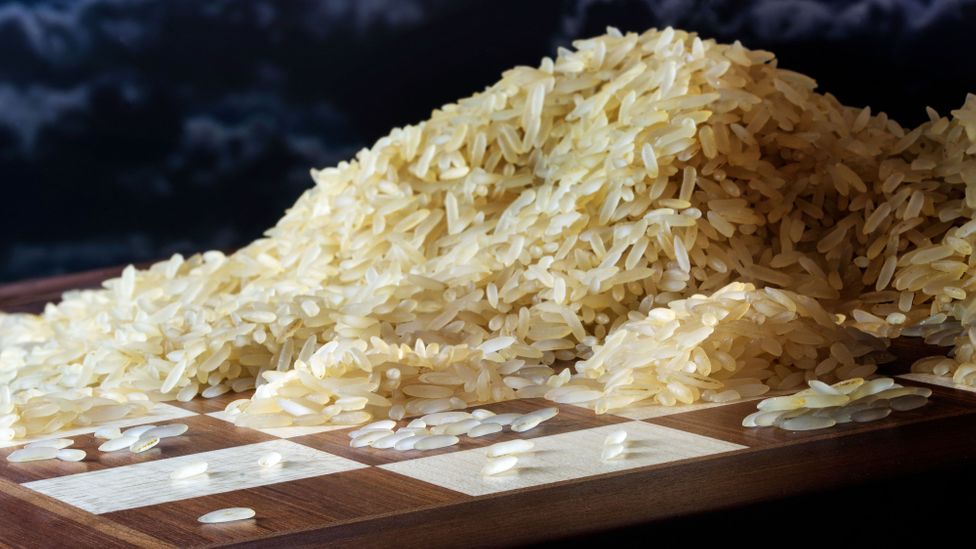 If the number of grains on a chess board doubled for each square, the 64th would ‘hold’ 18 quintillion (Credit: Getty Images)

Besides reducing their savings, the bias also renders people more vulnerable to unfavourable loans, where debt escalates over time. According to one study from 2008, the bias increases someone’s debt-to-income ratio from an average of 23% to an average of 54%.

Surprisingly, a higher level of education does not prevent people from making these errors. Even mathematically trained science students can be vulnerable, says Daniela Sele, who researchs economic decision making at the Swiss Federal Institute of Technology in Zurich. “It does help somewhat, but it doesn’t preclude the bias,” she says.

As I explored in my book The Intelligence Trap, intelligent and educated people often have a “bias blind spot”, believing themselves to be less susceptible to error than others – and the exponential growth bias appears to fall dead in its centre.

It was only this year – at the start of the Covid-19 pandemic – that researchers began to consider whether the bias might also influence our understanding of infectious diseases.

According to various epidemiological studies, without intervention the number of new Covid-19 cases doubles every three to four days, which was the reason that so many scientists advised rapid lockdowns to prevent the pandemic from spiralling out of control.

In March, Joris Lammers at the University of Bremen in Germany joined forces with Jan Crusius and Anne Gast at the University of Cologne to roll out online surveys questioning people about the potential spread of the disease. Their results showed that the exponential growth bias was prevalent in people’s understanding of the virus’s spread, with most people vastly underestimating the rate of increase. More importantly, the team found that those beliefs were directly linked to the participants’ views on the best ways to contain the spread. The worse their estimates, the less likely they were to understand the need for social distancing: the exponential growth bias had made them complacent about the official advice. 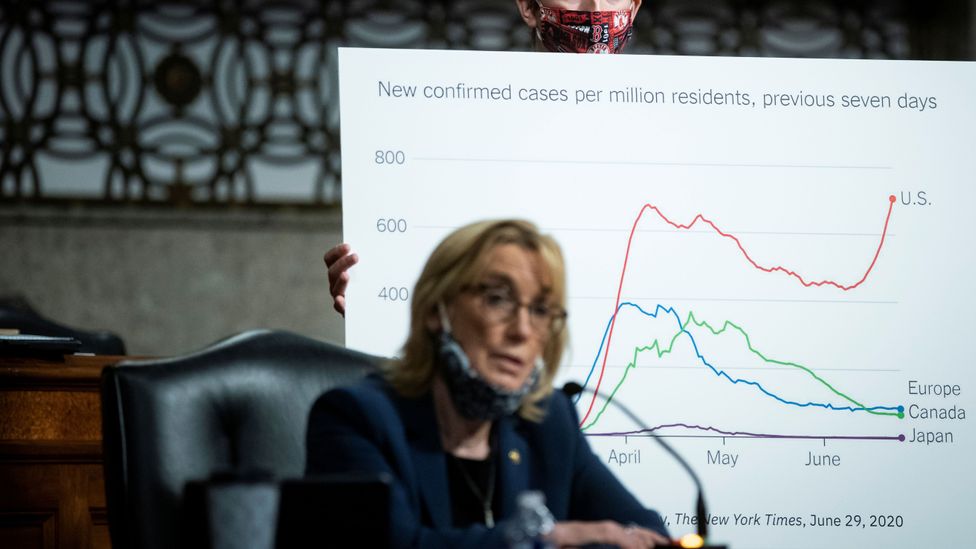 This chimes with other findings by Ritwik Banerjee and Priyama Majumda at the Indian Institute of Management in Bangalore, and Joydeep Bhattacharya at Iowa State University. In their study (currently under peer-review), they found susceptibility to the exponential growth bias can predict reduced compliance with the World Health Organization’s recommendations – including mask wearing, handwashing, the use of sanitisers and self-isolation.

The researchers speculate that some of the graphical representations found in the media may have been counter-productive. It’s common for the number of infections to be presented on a “logarithmic scale”, in which the figures on the y-axis increase by a power of 10 (so the gap between 1 and 10 is the same as the gap between 10 and 100, or 100 and 1000).

While this makes it easier to plot different regions with low and high growth rates, it means that exponential growth looks more linear than it really is, which could reinforce the exponential growth bias. “To expect people to use the logarithmic scale to extrapolate the growth path of a disease is to demand a very high level of cognitive ability,” the authors told me in an email. In their view, simple numerical tables may actually be more powerful.

The good news is that people’s views are malleable. When Lammers and colleagues reminded the participants of the exponential growth bias, and asked them to calculate the growth in regular steps over a two week period, people hugely improved their estimates of the disease’s spread – and this, in turn, changed their views on social distancing. Sele, meanwhile, has recently shown that small changes in framing can matter. Emphasising the short amount of time that it will take to reach a large number of cases, for instance – and the time that would be gained by social distancing measures – improves people’s understanding of accelerating growth, rather than simply stating the percentage increase each day.

Lammers believes that the exponential nature of the virus needs to be made more salient in coverage of the pandemic. “I think this study shows how media and government should report on a pandemic in such a situation. Not only report the numbers of today and growth over the past week, but also explain what will happen in the next days, week, month, if the same accelerating growth persists,” he says.

He is confident that even a small effort to correct this bias could bring huge benefits. In the US, where the pandemic has hit hardest, it took only a few months for the virus to infect more than five million people, he says. “If we could have overcome the exponential growth bias and had convinced all Americans of this risk back in March, I am sure 99% would have embraced all possible distancing measures.”

Guest Author: David Robson is the author of The Intelligence Trap: Why Smart People Do Dumb Things (WW Norton/Hodder & Stoughton), which examines the psychology of irrational thinking and the best ways to make wiser decisions.

This article first appeared in www.bbc.com