Advertising in the age of mechanical creation 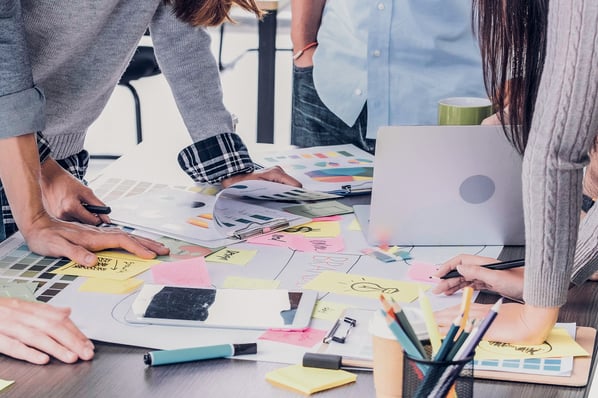 Over the quarter century duration of my ‘career’, we have experienced a number of distinct waves of technological disruption.

I came into the working world at the end of the last millennium when some elements of a digital revolution were already in place: PowerPoint, Photoshop and Excel. InDesign was just beginning to disrupt the ubiquitous QuarkXpress layout software that was still used in publishing houses, as I learned when I worked at Maxim Magazine (UK). Apple’s Keynote wouldn’t herald an era of beautiful decks until 2003.

Outside, larger waves were turning early adopters into surfers on an information superhighway. As a consultant I showed WAP (Wireless Application Protocol) adoption curves to corporations, urging them to get on board the new ‘internet in the palm of your hand’. These descriptions and curves proved to be optimistic. As an agency employee I helped market 3G, and then 4G, to consumers for telecoms companies in three different markets, whilst selling companies on the opportunities presented by the web, and then web 2.0, smartphones, apps. Others are doing the same for web3 and whatever the metaverse might become as we speak. Each time, the hype cycles through, and things always take longer than you think.

Being too ahead of your time is the same as being wrong, commercially speaking, so many ‘first movers’ ended up building businesses for an infrastructure and consumer behavior that wasn’t to exist for a few years more than their funding would last, especially when they spent a lot of that funding on Super Bowl spots during the first dot com explosion. As in the current crypto era, many collapsed, but some were lucky enough to get acquired at absurd valuations before the music stopped. Mark Cuban sold broadcast.com, an early live-streaming service, to Yahoo! For $5.7bn in 1999. This is regarded as one of the worst acquisitions of all time (except by Cuban) since practically everyone was on a dial-up connection and therefore the service failed to find users and was soon discontinued. Various new model consultancies that sprang up during this wild time (I worked at a tiny one) collapsed but some survived by pivoting into digital agencies, including AKQA and Razorfish, before attempting to pivot back into consultancies decades later.

Technologists and investors use shapes to understand these waves – they are known as S-curves. At the beginning a new technology appears and is slowly refined to the point of being useful. This is followed, after a much longer period than people expect, by a period of rapid growth as technologies become user friendly and find business models, consumers, and scale. Then, after another unknown period of time, that curve flattens out at the top, growth slows as the market matures until It finally sputters to a halt. We have just lived through the most important consumer media S-curve since the adoption of the printing press, at the nexus of social media, smartphones and wireless connectivity. As Steve Jobs said when he launched the iPhone, “it works like magic”. This spawned new media giants, agencies, jobs and business models. Over the last few years, we have come to the end of that curve. Each new iPhone is indistinguishable from the previous year’s model, apart from a slightly better camera. I assume no one is queueing up for days for an iPhone anymore – they no longer seem magical at the tail end of the curve.

Meanwhile, agencies began to adopt new internal technologies. Today there might be more than a dozen applications used to do the job, even if most of it is still done in Ppt, Xls and Psd files. Digital asset management and distribution software, collaboration and resource management tools, media planning and insight tools, whatever Marcel is.

We are also at an inflection point in a new S-curve for ‘artificial intelligence’ that will change advertising and agencies in ways yet impossible to know. When I started writing about IBM’s Watson as a creative department in 2014 I was indulging in pie-in-the sky thinking partially because I’d been fed misleading PR about what Watson could really do. In January this year I used a version of GPT3 to write most of this column. A year is a long time at this point on the curve.

In the last couple of months Stable Diffusion and DALL·E 2, generative applications that create images based on text prompts, opened fully to the public. ChatGPT launched last week and it has come on leaps and bounds in understanding and topics it can write cogently about. These may seem like proof-of-concept novelties but as investor Chris Dixon likes to say, the future often starts out looking like a toy. Creatively minded people have already begun to incorporate AI into their workflows. I should note here that none of this is actually ‘artificial intelligence’, these apps don’t think, this is just optimistic branding. They are machine learning models trained on a huge corpus of human created art and writing, generating new combinations through statistical inference. There are issues of copyright here, since the systems are trained on art and words they didn’t create, although that is also how human artists and writers learn. Already, bespoke systems are being trained for advertising purposes across the entire media-industrial value chain.

Seenapse is an inspiration engine, fusing a human created database of associations to GPT3, that develops divergent concepts for advertising and activations. Remesh’s research platform allows “qualitative conversations at quantitative scale” by training an AI on an audience’s social media corpus and then asking it questions. DAIVID trained its AI on a combination of eye tracking, facial coding, claimed emotional responses and more to develop a creative effectiveness suite that understands and predicts attentional and emotional impact of video and even media plans. Media agency Reprise has invested in AI to bring to life its vision of using “high-frequency data” to plan and optimize media in real time.

Within creative agencies, structural change is likely with interesting implications for the business model. A significant amount of expensive creative time is spent making composites, sketches of ideas for presentations, to sell them to clients. Generative AI can do this in a fraction of the time and cost. Google’s Imagen platform announced it can now generate film clips from text prompts so ‘ripomatics’ won’t be long coming. According to storied venture investors Sequoia, the technology will be making logos, artwork and even websites and user interfaces better than humans can in the next few years. Sequoia of course has a vested interest here and things always take longer than you think – but Microsoft already announced a product called “Designer” that uses AI to inspire, design and publish social media content and Designs.Ai can create presentations in seconds.

Some will see this as a threat but that’s unhelpful. Rather, it will free up creative time and create demand for new roles, as previous waves did. This can make agencies faster and cheaper, and hopefully better, which is all clients ever really want. It will however require radically re-thinking a business model that sells hours of creative time making mock-ups, or even designing websites. Agencies are already emerging based on this approach. Supernatural in New York is a “a place where people and machines work together to make advertising better”. They have a tech stack dubbed “The Machine”, a suite of insight, strategy and creative production tools powered by “sophisticated AI algorithms and machine learning models sitting on top of an enterprise grade data stack that have been trained in the ad-making process.”

Before photographs emerged, advertising was illustrated by artists. This business was disrupted but photography didn’t destroy art, as Walter Benjamin feared it would in “Art in the Age of Mechanical Reproduction”, it simply became a new tool. It opened new possibilities and needed new kinds of artists and creative directors to use it. Planners and creatives will need to develop their ‘prompt engineering’ skills to work out how best to collaborate with AI to get more, better ideas, faster, and creative directors will need to tune their sensibilities accordingly. Lots of change will happen, eventually, as we ride along this new S-curve, and once again, for a brief window, technology feels a little bit like magic.

This article first appeared in https://www.warc.com/