Why Your Next Brainstorm Should Begin with an Embarrassing Story 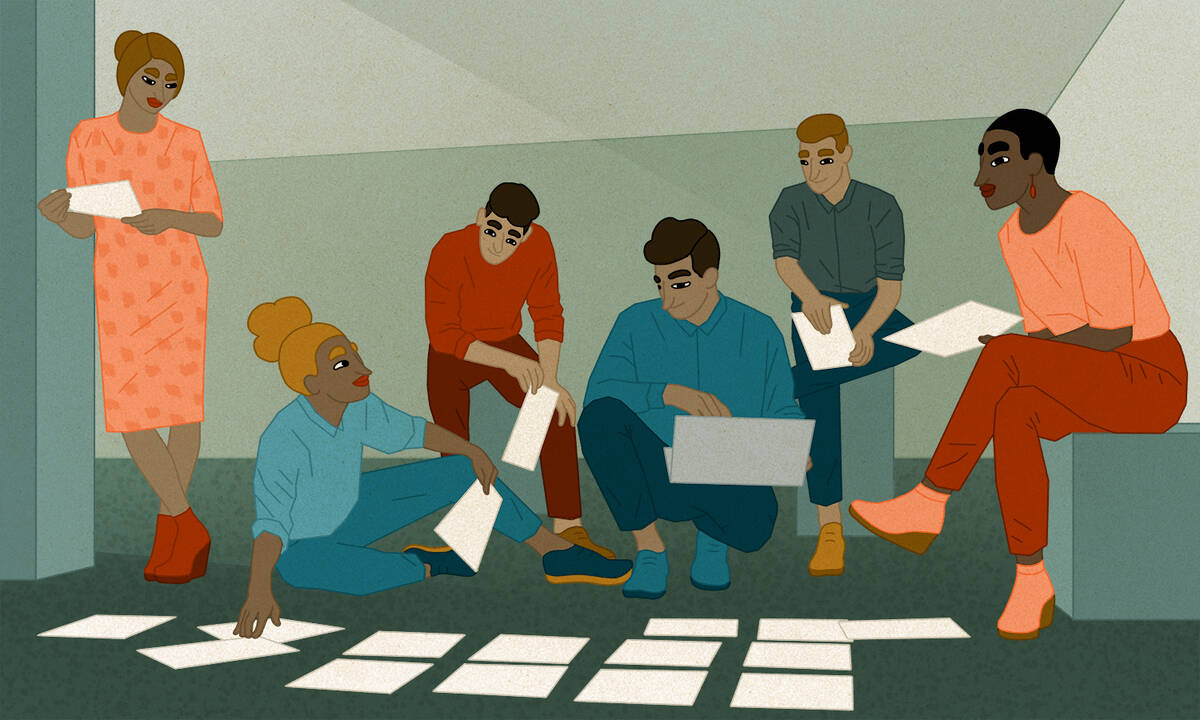 This counterintuitive exercise can spark creativity.

We’ve all had embarrassing moments at work—from finding a piece of spinach in your teeth after a big presentation, to thinking you muted yourself on a conference call, only to realize (a few snarky comments later) that you had not.

Yet new research from the Kellogg School shows that these moments may have a hidden power. Embarrassment, the study finds, can actually be a gateway to creativity. When participants in the study recounted an embarrassing moment before a brainstorming session, they came up with both a larger number and wider range of ideas than those who shared a memory that made them feel proud.

These cringe-worthy anecdotes seem to remove the barrier of self-censorship.

“When you have a brainstorming session, what you’re hoping is that people are putting out any idea, without regard to any judgment or evaluation,” says Leigh Thompson, a professor of management and organizations at Kellogg and author of Creativity Conspiracy: The New Rules of Breakthrough Collaboration.

Getting people to let their guard down is not easily done, says Thompson. So the idea that sharing an embarrassing moment could actually get a team’s creative juices flowing may appeal to managers.

“Any fix we find is going to have a direct line of sight to business outcomes, to helping teams be more productive,” says Thompson.

How (Not) to Build Creativity in Groups

As part of her consulting work, Thompson often facilitates corporate retreats. She noticed that organizers sometimes prompt attendees to do icebreaker exercises, which often involve recalling accomplishments and achievements.

The goal of these brag sessions might be to boost people’s confidence—after all, people prefer to focus on their accomplishments and minimize their shortcomings. But Thompson observed that it often had the opposite effect.

Afterwards, “when I wanted people to engage in a brainstorming session, they tended to self-censor, because they’d just heard about all these great accomplishments,” she says. She suspected that it was their sense of pride that was hindering their innovative thinking.

Which prompted the question: Might there be another emotion that could promote innovation? Eventually Thompson and her collaborators, Elizabeth Ruth Wilson of Harvard University and Brian J. Lucas of Cornell University, landed on embarrassment.

The researchers suspected that if individuals actually aired their embarrassing stories, it would encourage them to stop censoring themselves.
Learn more from Leigh Thompson in the executive education program Constructive Collaboration.

In some sense, embarrassment is a surprising choice: after all, we tend to associate it with incompetence and awkwardness—hardly inspiring characteristics. But previous research on creativity suggests that the fear of embarrassment—of being judged as incompetent and awkward—is what inhibits idea generation, rather than embarrassment itself. The researchers suspected that if individuals actually aired their embarrassing stories, it would relieve this feeling of impending judgment and encourage them to stop censoring themselves.

The researchers designed two experiments to test this hypothesis, one that looked at brainstormers’ creativity when they were alone, and one when they were part of a group.

Next, participants spent five minutes brainstorming as many unusual uses as they could for a paper clip. The researchers assessed their responses based on two standard measurements of creativity: the volume of ideas generated and the range of those ideas.

Participants who had recounted an embarrassing story generated significantly more ideas than those who recounted a proud moment. They also generated more ideas in different categories, such as using the paper clips as earrings (jewelry), tomato pins (gardening), and unconventional cocktail picks (utensils).

The researchers also ran a control group, which was asked to describe their commute to work before completing the paper-clip task. They found that this group’s results did not differ from those in the pride group—suggesting that the embarrassment made participants more creative than they would have been otherwise.

Next, Thompson and her colleagues wondered: Could embarrassing stories help boost creativity in teams, as well?

After all, in many business environments, brainstorming sessions tend to happen within teams. Yet some research shows that teams are actually less creative than individuals—making effective intervention strategies all the more valuable in a group setting.

The second experiment included 93 managers who were enrolled in a university executive-education program. The researchers randomly assigned the managers to three-person teams, instructing half to share an embarrassing moment from the past six months, and the others to share a proud one.

Among the embarrassing story groups, “There was often a question of, who’s going to go first?” Thompson says. “Eventually one person tells a story, and inevitably there was what I call communal laughter. They’re not laughing at the person. They are laughing and saying, ‘Oh my gosh, I’ve pretty much done the same thing,’ or, ‘I empathize with you.’”

“If somebody puts themselves out there by talking about a moment of embarrassment, reinforce that.”

Following the icebreaker, the groups were asked to generate unusual uses for a cardboard box. The results were clear: teams that shared embarrassing stories generated 26 percent more ideas than groups that shared stories of pride.

“One of the big findings in the creativity and innovation literature is that you want to have a lot of ideas to play with,” Thompson says. “If one group has nearly 30 percent more ideas than another group, there’s just a lot more fuel for the fire.”

An Unconventional Icebreaker for Brainstorming Sessions

Exactly why recounting embarrassing stories leads to more idea generation isn’t clear. The researchers hypothesize that it may alleviate concerns about future embarrassment and therefore promote performance. But it’s also possible that others in the group develop a greater liking for those who disclose their faults, which leads to more trust and better performance.

Whatever the reason, the finding could help managers spur creativity among their teams. That’s especially crucial as more and more organizations embrace design thinking, which requires that everyone feel comfortable bringing new ideas to the table.

Thompson recommends that managers consider beginning their brainstorming sessions with the embarrassing-story exercise. Not only does it promote idea generation, but it also engages people from the start. “Automatically, people start listening and they’re more engaged,” she says. “There’s an irresistible urge to let [the storyteller] finish, because the human story is never boring.”

But to get the most out of the exercise, it’s important that people share recent stories, so that they don’t think to themselves, “Well, I’m a different person now,” Thompson says.

Of course, the exercise isn’t right for every situation. If a team is engaged in a tactical mission like producing a financial report, or a problem-solving mission like damage control, that’s not the time to bring out embarrassing stories, Thompson notes.

But when it’s time for creativity and innovation, and employees begin to reveal their stories, managers should make sure to reciprocate.

“If somebody puts themselves out there by talking about a moment of embarrassment, reinforce that,” Thompson says. “Just say, ‘Oh, I’ve got one for you, too.’”

Guest Author: Emily Ayshford is a freelance writer in Chicago.