The four global forces breaking all the trends 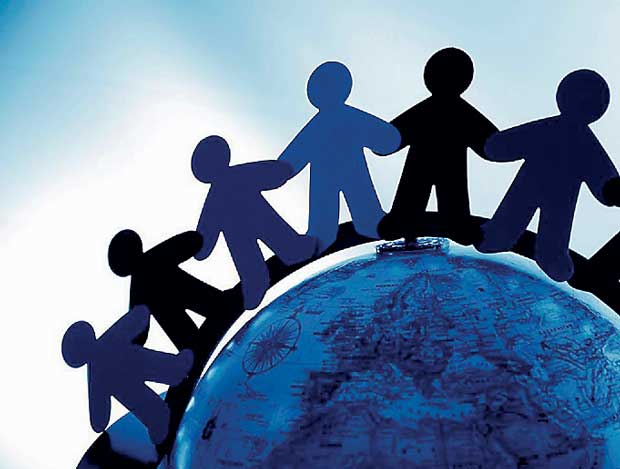 The world economy’s operating system is being rewritten. In this exclusive excerpt from the new book No Ordinary Disruption, its authors explain the trends reshaping the world and why leaders must adjust to a new reality.

In the Industrial Revolution of the late 18th and early 19th centuries, one new force changed everything. Today our world is undergoing an even more dramatic transition due to the confluence of four fundamental disruptive forces—any of which would rank among the greatest changes the global economy has ever seen. Compared with the Industrial Revolution, we estimate that this change is happening ten times faster and at 300 times the scale, or roughly 3,000 times the impact. Although we all know that these disruptions are happening, most of us fail to comprehend their full magnitude and the second- and third-order effects that will result. Much as waves can amplify one another, these trends are gaining strength, magnitude, and influence as they interact with, coincide with, and feed upon one another. Together, these four fundamental disruptive trends are producing monumental change.

1. Beyond Shanghai: The age of urbanization

The first trend is the shifting of the locus of economic activity and dynamism to emerging markets like China and to cities within those markets. These emerging markets are going through simultaneous industrial and urban revolutions, shifting the center of the world economy east and south at a speed never before witnessed. As recently as 2000, 95 percent of the Fortune Global 500—the world’s largest international companies including Airbus, IBM, Nestlé, Shell, and The Coca-Cola Company, to name a few—were headquartered in developed economies. By 2025, when China will be home to more large companies than either the United States or Europe, we expect nearly half of the world’s large companies—defined as those with revenue of $1 billion or more—to be headquartered in emerging markets. “Over the years, people in our headquarters, in Frankfurt, started complaining to me, ‘We don’t see you much around here anymore,’” said Josef Ackermann, the former chief executive officer of Deutsche Bank. “Well, there was a reason why: growth has moved elsewhere—to Asia, Latin America, the Middle East.”

Perhaps equally important, the locus of economic activity is shifting within these markets. The global urban population has been rising by an average of 65 million people annually during the past three decades, the equivalent of adding seven Chicagos a year, every year. Nearly half of global GDP growth between 2010 and 2025 will come from 440 cities in emerging markets—95 percent of them small- and medium-size cities that many Western executives may not even have heard of and couldn’t point to on a map.<a “=”” class=”link-footnote” rel=”#footnote1″>1 Yes, Mumbai, Dubai, and Shanghai are familiar. But what about Hsinchu, in northern Taiwan? Brazil’s Santa Catarina state, halfway between São Paulo and the Uruguayan border? Or Tianjin, a city that lies around 120 kilometers southeast of Beijing? In 2010, we estimated that the GDP of Tianjin was around $130 billion, making it around the same size as Stockholm, the capital of Sweden. By 2025, we estimate that the GDP of Tianjin will be around $625 billion—approximately that of all of Sweden.

2. The tip of the iceberg: Accelerating technological change

The second disruptive force is the acceleration in the scope, scale, and economic impact of technology. Technology—from the printing press to the steam engine and the Internet—has always been a great force in overturning the status quo. The difference today is the sheer ubiquity of technology in our lives and the speed of change. It took more than 50 years after the telephone was invented until half of American homes had one. It took radio 38 years to attract 50 million listeners. But Facebook attracted 6 million users in its first year and that number multiplied 100 times over the next five years. China’s mobile text- and voice-messaging service WeChat has 300 million users, more than the entire adult population of the United States. Accelerated adoption invites accelerated innovation. In 2009, two years after the iPhone’s launch, developers had created around 150,000 applications. By 2014, that number had hit 1.2 million, and users had downloaded more than 75 billion total apps, more than ten for every person on the planet. As fast as innovation has multiplied and spread in recent years, it is poised to change and grow at an exponential speed beyond the power of human intuition to anticipate.

Processing power and connectivity are only part of the story. Their impact is multiplied by the concomitant data revolution, which places unprecedented amounts of information in the hands of consumers and businesses alike, and the proliferation of technology-enabled business models, from online retail platforms like Alibaba to car-hailing apps like Uber. Thanks to these mutually amplifying forces, more and more people will enjoy a golden age of gadgetry, of instant communication, and of apparently boundless information. Technology offers the promise of economic progress for billions in emerging economies at a speed that would have been unimaginable without the mobile Internet. Twenty years ago, less than 3 percent of the world’s population had a mobile phone; now two-thirds of the world’s population has one, and one-third of all humans are able to communicate on the Internet.<a “=”” class=”link-footnote” rel=”#footnote2″>2 Technology allows businesses such as WhatsApp to start and gain scale with stunning speed while using little capital. Entrepreneurs and start-ups now frequently enjoy advantages over large, established businesses. The furious pace of technological adoption and innovation is shortening the life cycle of companies and forcing executives to make decisions and commit resources much more quickly.

3. Getting old isn’t what it used to be: Responding to the challenges of an aging world

The human population is getting older. Fertility is falling, and the world’s population is graying dramatically. While aging has been evident in developed economies for some time—Japan and Russia have seen their populations decline over the past few years—the demographic deficit is now spreading to China and soon will reach Latin America. For the first time in human history, aging could mean that the planet’s population will plateau in most of the world. Thirty years ago, only a small share of the global population lived in the few countries with fertility rates substantially below those needed to replace each generation—2.1 children per woman. But by 2013, about 60 percent of the world’s population lived in countries with fertility rates below the replacement rate. This is a sea change. The European Commission expects that by 2060, Germany’s population will shrink by one-fifth, and the number of people of working age will fall from 54 million in 2010 to 36 million in 2060, a level that is forecast to be less than France’s. China’s labor force peaked in 2012, due to income-driven demographic trends. In Thailand, the fertility rate has fallen from 5 in the 1970s to 1.4 today. A smaller workforce will place a greater onus on productivity for driving growth and may cause us to rethink the economy’s potential. Caring for large numbers of elderly people will put severe pressure on government finances.

The final disruptive force is the degree to which the world is much more connected through trade and through movements in capital, people, and information (data and communication)—what we call “flows.” Trade and finance have long been part of the globalization story but, in recent decades, there’s been a significant shift. Instead of a series of lines connecting major trading hubs in Europe and North America, the global trading system has expanded into a complex, intricate, sprawling web. Asia is becoming the world’s largest trading region. “South–south” flows between emerging markets have doubled their share of global trade over the past decade. The volume of trade between China and Africa rose from $9 billion in 2000 to $211 billion in 2012. Global capital flows expanded 25 times between 1980 and 2007. More than one billion people crossed borders in 2009, over five times the number in 1980. These three types of connections all paused during the global recession of 2008 and have recovered only slowly since. But the links forged by technology have marched on uninterrupted and with increasing speed, ushering in a dynamic new phase of globalization, creating unmatched opportunities, and fomenting unexpected volatility.

These four disruptions gathered pace, grew in scale, and started collectively to have a material impact on the world economy around the turn of the 21st century. Today, they are disrupting long-established patterns in virtually every market and every sector of the world economy—indeed, in every aspect of our lives. Everywhere we look, they are causing trends to break down, to break up, or simply to break. The fact that all four are happening at the same time means that our world is changing radically from the one in which many of us grew up, prospered, and formed the intuitions that are so vital to our decision making.

This can play havoc with forecasts and pro forma plans that were made simply by extrapolating recent experience into the near and distant future. Many of the assumptions, tendencies, and habits that had long proved so reliable have suddenly lost much of their resonance. We’ve never had more data and advice at our fingertips—literally. The iPhone or the Samsung Galaxy contains far more information and processing power than the original supercomputer. Yet we work in a world in which even, perhaps especially, professional forecasters are routinely caught unawares. That’s partly because intuition still underpins much of our decision making.

Our intuition has been formed by a set of experiences and ideas about how things worked during a time when changes were incremental and somewhat predictable. Globalization benefited the well established and well connected, opening up new markets with relative ease. Labor markets functioned quite reliably. Resource prices fell. But that’s not how things are working now—and it’s not how they are likely to work in the future. If we look at the world through a rearview mirror and make decisions on the basis of the intuition built on our experience, we could well be wrong. In the new world, executives, policy makers, and individuals all need to scrutinize their intuitions from first principles and boldly reset them if necessary. This is especially true for organizations that have enjoyed great success.

While it is full of opportunities, this era is deeply unsettling. And there is a great deal of work to be done. We need to realize that much of what we think we know about how the world works is wrong; to get a handle on the disruptive forces transforming the global economy; to identify the long-standing trends that are breaking; to develop the courage and foresight to clear the intellectual decks and prepare to respond. These lessons apply as much to policy makers as to business executives, and the process of resetting your internal navigation system can’t begin soon enough.

There is an urgent imperative to adjust to these new realities. Yet, for all the ingenuity, inventiveness, and imagination of the human race, we tend to be slow to adapt to change. There is a powerful human tendency to want the future to look much like the recent past. On these shoals, huge corporate vessels have repeatedly foundered. Revisiting our assumptions about the world we live in—and doing nothing—will leave many of us highly vulnerable. Gaining a clear-eyed perspective on how to negotiate the changing landscape will help us prepare to succeed.

This article first appeared in www.mckinsey.com Seeking to build and grow your brand using the force of consumer insight, strategic foresight, creative disruption and technology prowess? Talk to us at +971 50 6254340 or engage@groupisd.com or visit www.groupisd.com/story