Metaphors Matter in a Time of Pandemic 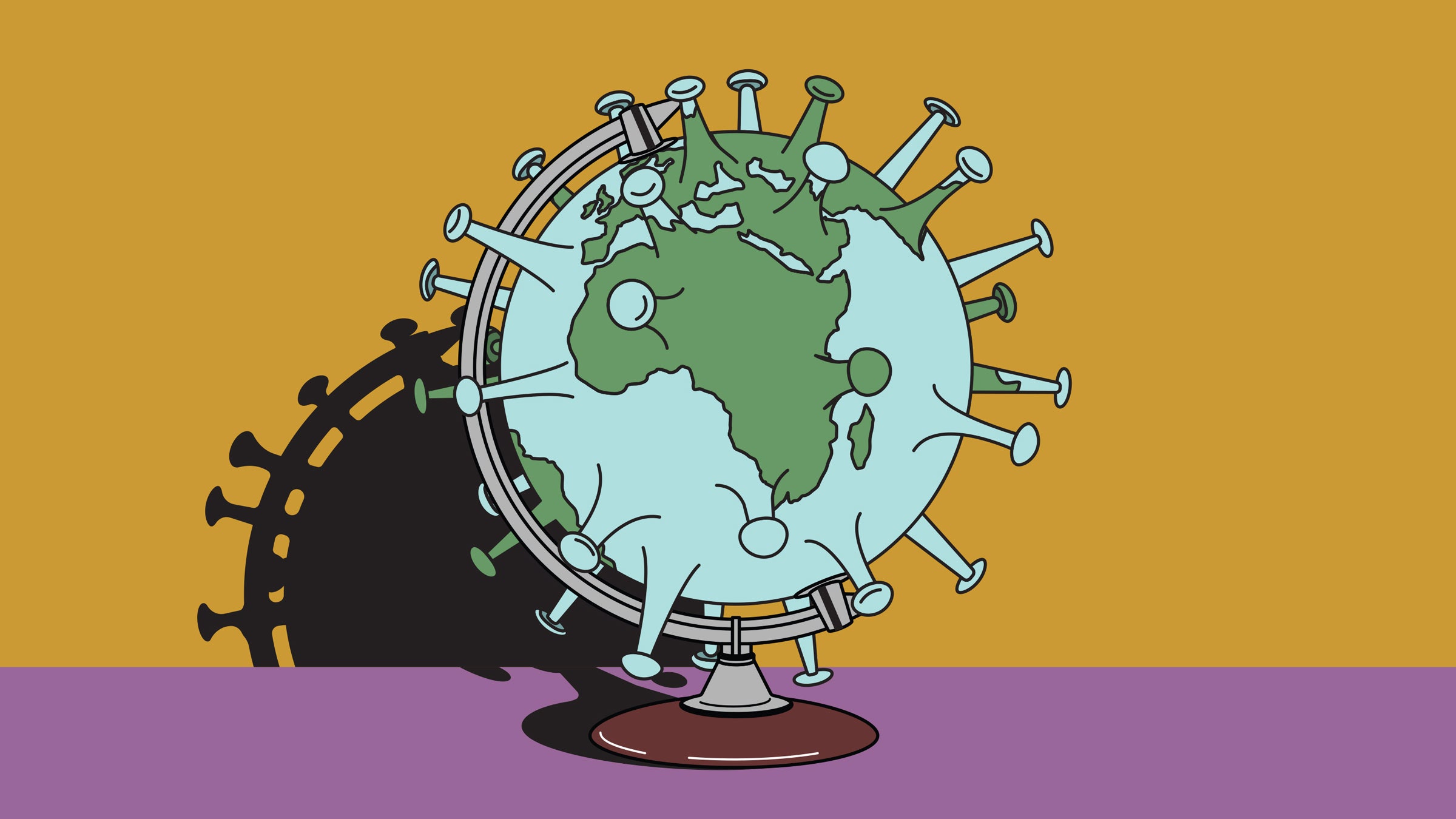 VIBRATING, NEAR-HALLUCINATORY, THE Manú National Park in Peru is among the most biodiverse places on earth. Just about every one of the park’s 4.3 million acres, where the Tropical Ades meet the Amazon Basin, seethes with raw biology—at least 1,300 species of butterflies and 650 of beetles; numberless white-lipped peccaries, tufted capuchins, green anacondas, turquoise tanagers. Flora and fauna to infinity.

It’s also the zoomed-out version of a landscape closer to hand: the one that runs up our noses and through our twisted guts. What human flesh lacks in jaguars, it makes up for in microorganisms of every stripe: 10 to 100 trillion swarming creatures, thousands of distinct species of bacteria, viruses, fungi, archaea, and protozoa, which means our bodies at any given minute may contain tens of millions of foreign genes.

Why go through all this again, the hideous miracle of the human microbiota? Because our teeming abdominal and nasal rain forests are of course contending with a stranger: SARS-CoV-2. The virus has upset the human microbiome in an epochal act of strategic surprise.

Almost instantly, that shock generated a set of metaphors drawn from warfare. This may be inevitable in a time of great fear. But more useful models for confronting a pandemic may come from the microbiome itself—and from the mechanisms, from human care to life-extending machines, used to give our immune systems time to learn the signatures of a new virus. In hypermagnified vanity portraits, the coronavirus that stopped humanity in its tracks this winter looks like the fearsome head of a medieval morning star, fit to kill in a gory blunt-force-puncture attack. SARS-CoV-2, like all viruses, is a biological entity, but it is, many virologists contend, something less than alive; it contains genetic information, but it can’t reproduce. Zania Stamataki, a viral immunologist at the University of Birmingham in the UK, likens viruses to robots.

The image of maces or robots bearing spikes and cracking open our cells does at first conjure a military attack. Indeed Bill Gates has said we ought to have prepared for a pandemic as if for armed conflict. In March, Donald Trump dubbed himself a “wartime president.” More recently, military veterans have urged people enduring the Covid-19 contagion to think like prisoners of war.

But Scott Knowles, a disaster expert who runs the history department at Drexel, is wary of martial language. Warfare may be a rousing way to speechify, he has written, but it’s perilous when used to describe disasters from Hurricane Katrina to pandemics. For one, if we’re at war, we expect command-and-control rather than the spontaneous volunteerism we’ve seen with self-isolation and self-quarantine. War rhetoric also suggests that sacrificial casualties ought to be sustained in the name of patriotism. And, finally, it allows for bad or even inhumane decisions excused as a consequence of the “fog of war.”

“We have another set of metaphors at hand,” Knowles told me by email. “They’re tailor-made for our moment: the metaphors of science and medicine. Doctors, nurses, and support staff work with urgency, but their goal is life, not death. Their mandate is not to save the nation but rather to support humanity.” The language of instruction, practice, and the “do no harm” principle could have more explanatory and even predictive power than those drawn from war.

Humanity is externally heterogeneous, of course, and responses to the pandemic must be shared among nations. But each of us is internally heterogeneous also, filled with Manú-caliber biodiversity that defies the us-and-them rhetoric of war. “Support”—as in life support, which extends the resources of an individual with community and technology—carries that plural with it. A single human must indeed pluralize, as she sounds an alarm, makes a 911 call, to multiply her resources with human community and medical professionals, who expand her body’s capacities with everything from words of comfort to Tylenol to IV hydration. When nurses and doctors further use ventilators and dialysis with a Covid-19 patient, the machines serve as supplementary lungs and kidneys to give her immune system time to get sorted.

Our bodies must make overtures that combine the microbial version of suspicion, curiosity, and detachment. We have to become doormen to the virus, not doormats.

As unlikely as it seems in the thick of this pandemic, one day the new coronavirus will be priced into public health and economic calculations. The American health care system will never again be caught so short of protective gear, ventilators, and hospital beds. And then there’s the fate of the virus itself, which will join the swarm of microbes in which humans exist. If a vaccine arrives, we’ll deliberately take it in, in small inoculating doses.

In wartime, an enemy army must be styled as hostile to allow for its destruction, but an insensate, nonliving virus has no such valence. Human bodies don’t aim to murder a new virus. “Viruses aren’t alive,” Janelle Ayres, a molecular and systems physiologist at the Salk Institute, put it in an email. “So it doesn’t make sense to discuss them in terms of killing them.” Instead, immunologists speak of neutralization. The immune system can sometimes incorporate an initially alien virus into its repertoire, the way the mind, with study, might absorb a difficult foreign word into its vocabulary.

To pull this off, unsuspecting human organisms are compelled not to contract in a defensive crouch but to expand. Once the bug is inside us, its spikes attach to cell membranes. The virus fuses with the subjugated cell, sheds its spikes, and releases nucleotides inscribed with hijackers’ demands. Make more like this, the orders go. And here’s how: a cup of protein, a cup of lipids, and a tablespoon of nucleotides. (Measurements not to scale.) Our physiologies are now forced, on pain of death, to respond to this violent guest. We can’t now lock the virus out, as if it were an invader. But nor can we throw open our arms to it, as if it were a friend. As Stamataki grimly notes, humans did indeed welcome the virus in—to our habitats, our houses, and our noses. Our bodies must make overtures to it that combine the microbial version of suspicion, curiosity, and detachment. We have to become doormen to the virus, not doormats.

Certain patients seem to have cells that are easier to open and more readily forced into compliance with the nucleotides. But if their bodies hustle too obediently to satisfy the demands of the virus, before immune cells announce the breach, vital organs might be overrun. The virus has been accommodated, but at the expense of the organs of the host. In some patients, according to Randy Cron, a rheumatologist at the University of Alabama at Birmingham, an immune system might rev too high, oversupplying molecules called cytokines that, though usually protective, can attack and destroy vital organs. Some Covid-19 patients may die of the virus; others die of their own excessively aggressive immune response.

In some 97 percent of international cases, according to a preliminary estimate in The Lancet in February, the new coronavirus is said to “resolve.” What of the coronavirus particles—the ones whose spikes have been rendered impotent by antibodies—that persist in the bodies of those who outlive the siege? They’re neutralized—and bounced out. Now their image is on a blacklist: If the body encounters Covid-19’s face, the virus, it seems, is rapidly disarmed. When and if a vaccine is developed, it will also likely teach the body, more quickly and at lower cost to our cells, what to look out for. This isn’t war. It’s enlightenment.

Rookies, once initiated, are often asked to do the worst chores. So too the new antibody, with its powerful memory, will have to play bouncer, spotting and neutralizing chaos agents at a glance. And there will be more breaches. There will likely be another Covid season, and another, and another. But the virus will be known and seen—familiar as a regular, if troublesome, visitor to the jungle of bugs inside us.

Once we learn a particular operation—in math, say—we can recognize and solve problems that require it when they surface the next time, with decreasing effort. We’ll recognize this pathogen when it comes around again. During the vertigo of the quarantine spring of 2020, one of the few consolations is that this coronavirus will never be novel again.

Guest Author: Virginia Heffernan is a contributor at WIRED. She is the author of Magic and Loss: The Internet as Art. She is also a cohost of Trumpcast, an op-ed columnist at the Los Angeles Times, and a frequent contributor to Politico. Before coming to WIRED she was a staff writer