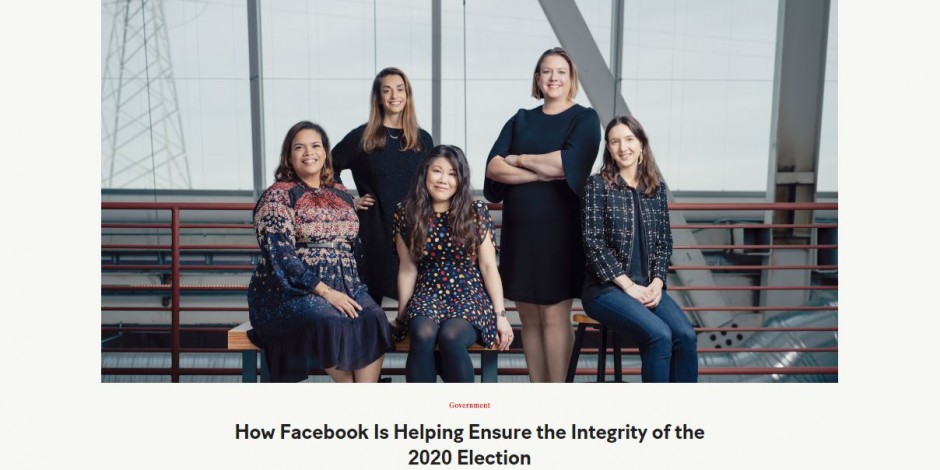 Teen Vogue has endured heavy criticism for publishing a fluffy Q&A with five female Facebook executives who ‘explained’ how the social network ‘protects elections’. What looked to be an undisclosed advertorial landed after the social network came under fire for its negative impacts on the democratic process ahead of the 2020 election.

Facebook continues to face questions around its acceptance of political ads given other networks turn them away, it is well-documented struggles to police misinformation and the fallout out of the Cambridge Analytica scandal which saw its data weaponised to influence voters.

However, on Wednesday 8 January Teen Vogue ran ‘How Facebook Is Helping Ensure the Integrity of the 2020 Election’.

The piece originally ran without a byline or an advertorial label. It said: “As the 2020 campaign gains speed, Facebook is taking measures to protect against foreign interference and stop the spread of misinformation… Facebook is at the forefront of encouraging civic discourse.”

Five top Facebook execs went on to list the many steps it is taken to ‘ensure the integrity of the election’. After being called out by readers and journalists on social networks, Teen Vogue amended the piece with an advertorial label. However, Facebook then denied paying for it. The story has since been deleted after a now deleted tweet from a Teen Vogue Twitter account admitting it was unsure what the feature was supposed to be.

The title blamed “labelling confusion” but it appears to have originated from Facebook’s sponsorship of the three-day Teen Vogue Summit last November. The article was at some stage a part of that package and was uploaded to the CMS, reports The Wall Street Journal citing someone close to the incident.

The incident has raised wider questions about disclosure around branded content. What’s New In Publishing reported that publisher branded content revenue grew by 40% into the first half of 2019, the negative side of this growth is that the media could be used to gloss over corporate shortcomings.

However, there are rules in place to ensure publishers do not disguise paid-for pieces as editorial. Andrew Canter, global chief executive of the Branded Content Marketing Association told The Drum that brands need to be “extremely clear, honest and transparent about labelling” on advertorial content or risk a backlash.

Canter’s organisation helps create the ‘rules and regulations’ of the space, a code of conduct that members sign up to when they join. One of the most relevant rules is that “Members [whether marketers, publishers or owners of other media] should ensure that marketing communications are designed and presented in such a way that it is clear that they are marketing communications.”

Similar codes of conduct are in place globally to ensure a separation of church and state in the media.

On how to avoid gaffes like the Teen Vogue one, he said: “We always advise brands to be extremely clear, honest and transparent about labelling – if you are not clear you will get found out and it will damage your brand. This is not ‘rocket science’ and often reflects negatively on those who are trying to behave in the right way and within the rules.

“You need to ask yourself whether being untruthful is beneficial to your brand particularly as we move into a new decade with ‘purpose’ at the heart of an increasing number of marketing campaigns. It is a simple message – don’t do it, it is not worth the risk.”

This article first appeared in www.thedrum.com

Guest Author: JOHN MCCARTHY, Reporter, The Drum. John is online senior reporter at The Drum. It’s his job to tell agencies and advertisers everything they need to know about media (everywhere they can put an ad).